The following article was written by Dee Mardi, who writes a column for the Chelmsford Magazine "The Edge".  This is Dee's original piece - an edited version was published in the December 2001 edition of "The Edge".

It might be the twenty-first century, but people are as sceptical of alternative medicine as ever. Especially ones offering "nil by mouth" philosophies to soothing music and mind-painted pictures - so conditioned are we to swallowing miracle cures or rubbing them into or planting them under our skin.

My appetite for hypnosis had been whetted in 1992, just before Sprog One rocketed into St John’s hospital. NCTism indoctrinated me that natural childbirth was better than unnatural childbirth. Mothers-to-be should be martyrs. "Cast aside epidurals, pethadine, gas and air, girls and suffer, mummy, suffer!" Hypnosis overcame mad panic for me and as I later discovered, Nicolette Lawson herself!

That was 9 years ago but I’d since witnessed a stage hypnotist create a near riot in a social club- a "hypnotised" drunken jujitsu black belt floored a guy with almost fatal consequences! So I checked her credentials and to my surprise discovered Dr Nicolette Lawson’s Doctorate isn’t in medicine but in Environmental Technology, with a degree in Mechanical Engineering too. However, she also has a Diploma from the London Life Force School of Hypnotherapy and works as a clinical Hypnotherapist as well as business consultant in Solihull.

Is self-hypnosis something openly discussed by people who can do it, or something often practised but "kept in the closet" for fear of being ridiculed?
NL Yes and yes. People who do it tend to discuss it openly with others who are receptive, but those who live amongst people who have closed minds tend to keep it secret. That's why people who come on the course find it so empowering - because they are amongst people who are all learning the same thing and will not ridicule them. It is a "safe" environment to explore this new way of thinking.

My perception is that people turn to hypnosis when other treatments fail- i.e. as a last resort. Would you agree or how does it rate in the alternative medicine scale of usage in terms of first choice, 2nd choice etc?
NL You're right, many do use it as a last resort, but those who are aware of its power (via friends or relations) use it as their first choice alternative if all traditional medicine can offer is another prescription for drugs.

What are the most and least common problems students of yours have overcome successfully?
NL Most common are to do with sleep, stress, confidence, smoking etc. Least common? I'm not sure. Most problems can be solved with calmness, relaxation, more confidence, more competence and better sleep and that's definitely what self-hypnosis teaches you.

Do you expect the attendees to be able to overcome a singular problem by the end of the course or multiple?
NL Having learnt the tools and techniques, students should be able to address almost any issue they want to (except deep psychological problems, which would need the help of a Hypnotherapist).

My hyp. hit list was growing but enthusiasm about spending 7-10pm Fri, 10am-10pm Sat and 10-7pm Sunday on a hard floor with a blanket and cushion wasn’t. A duvet, pillow and alarm clock seemed more in order! And so to

Friday Night.Paul Merton didn’t greet me on entering room 101 in the APU Sawyers Building but smiles, teas, coffee, herbal/fruit infusions, water, fruity drinks and choccie biscuits on a “help-yourself when you want” basis did. I liked that a lot! 13 turned up for this open session, mostly Nicolette’s relatives or people known to them. And Estelle Hook a nearly qualified Brentwood Hypnotherapist. A staged event perhaps? No- most business is personally recommended and Nicolette’s family are Chelmsfordian sceptics!

First the record was set straight: hypnosis isn’t about trance-induced zombies doing what they normally wouldn't but is a way of accessing your subconscious mind. The Subby is the resource for your creativity and imagination; it is the source of your emotions and directs nearly all your behaviour. Say the wrong words to it and negativity is reinforced. But by issuing new instructions through positive language (giving the suggestion) in a safe environment, hypnosis enables you to re-programme your mind. The results may seem like miracles bringing about changes in body, behaviour and sleep patterns. Self-hypnosis is the ultimate D.I.Y. skill!

And as for the “Look into my eyes, your will is my command” bit, forget it! You must WANT to do it. You stay in control, aware, responsive to any emergency and safe at all times. I presumed it wasn’t going to be anything like hypno-sex TV or a Paul McKenna show either. Or would it?

Nicolette’s and Estelle’s first hypnosis aka zapping demonstration was so quick and too exaggerated for the Doubting Thomases amongst us until one by one volunteers were zapped just as quick! I thought it wasn’t for real and “it couldn’t happen to me!”

To be willing is one thing. But to stand solidly, close your eyes, and within seconds be magnetically drawn backwards into strangers’ arms and stretched out on the floor is quite another. I was not convinced - until I experienced it myself. No fear, no anxiety. Total trust, totally at ease, eyes twitching, visualising illuminous green. Completely comfortable yet as rigid as a post. And I still remember everything. Mind-blowing!

Saturday. Peter (the cynical older brother) and 4 middle aged ladies came back after a "wonderful night’s sleep"- thunder woke me up though, didn’t it! By now the group was bonding, having fun and Nicolette had become Nicki. Much of the day was spent lying on the floor and I was rather glad I’d brought my well-padded sleeping bag and pillow. Imagined beaches and trees deepened relaxation and hypnosis but it was the dimmed lights rather than the instrumental music that made Peter nod off! Even under hypnosis we heard him snore, but the cynic wouldn’t believe us! We watched a video of our "zapped" group. On Nicki’s suggestion, some raised an arm, "floating like a balloon" for up to 20 mins- I resisted the urge.

At 6.15pm we were gorging a Chinese buffet at The Imperial and by 7.15pm we were back to mind-mapping, suggestion writing and more relaxation.

Mind-maps focus your thoughts and ideas on paper. If you hate going to the dentist, you’ll need to look forward to it, get there, be calm, pain free, heal well etc. These important points will form your intended suggestion under hypnosis, and you must plan what you say before zapping yourself!

Suggestion writing makes your mind see your glass "half full" rather than "half-empty". Saying "I can’t do something, I’m bad at something" etc becomes a self-fulfilling prophecy because you are telling your sub-conscious mind the same thing. The heard negative is stored and reinforced. Giving your suggestion in positive unambiguous phraseology is stronger than any happy pill. It’s so much easier to speak negative words though, isn’t it!

The idea of thanking your sub-conscious seemed silly at first until it struck me that self-hypnosis parallels faith healing, religious rituals and prayers - the difference being it is our inner self rather than a chosen deity that we thank for empowering us.

After a pizza lunch, the self- zap programme was installed practised and used. Our subbies remembered the recipe for deepening hypnosis, staying in control and safe from random thoughts. And as the saying goes, the proof of the pudding is in the eating and Nicki was about to provide a feast of amazing challenges!

Marion bravely volunteered for the first challenge. After self-zapping she followed 3 suggestions to prepare for being lifted and balanced as though a bar of steel upon the tops of two chairs. Nicki’s repetitive chanting kept her mind focused. Nicki sat on her and I photographed. Angela and even perturbed Peter made it.

Call me a wimp but I didn’t fancy Nicki sitting on me (bad neck and all that!). I did agree to the first part and was gob-smacked when I didn’t V-fold! I guess even I could have stomached Nicki’s weight too!

However, the pin challenge was definitely not something I wanted to participate at all in and is probably the only thing I took exception to. Under self-hypnosis, the others allowed Nicki to pass a lighter-flame sterilised (cold) nappy pin through the skin of their chosen arm, believing it would cause no pain, infection, bruising, bleeding, swelling, soreness or stinging. She put them back in hypnosis to remove it. None bled, though 2 winced, maybe due to the force needed to push it through!

I grimaced. Why the need for such an extreme demonstration of the power of hypnosis when we were already convinced? Those who chose to do this were euphoric with their success and tattoo mementoes but the event unnerved me.

This dramatic climax ended the course. It was time to go home with our manuals and achievement certificates.

Nappy pins and jargon aside, the course was enjoyable and professionally run in a friendly, informal way. Students learnt self-hypnosis through slide presentation, discussion, and practical implementation. Everyone felt they’d got what they’d hoped for- empowerment, calm and joy, sleep, confidence. Even Peter became "more and more convinced of the power of the mind"… and by the end was converted.

Alternative therapy sessions often have elements that lend themselves to ridicule, sensationalism and misunderstanding. If you can get past these then hypnosis is definitely worth trying as a natural remedy for both physical and emotional problems. We don’t chill out as much as we should do - so intent are we on cramming our lives full of activities and work. If we’d gained nothing more from this course than how to recharge our batteries so feeling better and more equipped to deal with life’s stresses, then £250 was still money well spent. Peace of mind is priceless.

This article, written by Mark Prottey, appeared in the Solihull Times on Friday 11th April 2003.

articles about M-Power-ME SElf hypnosis courses, in the media 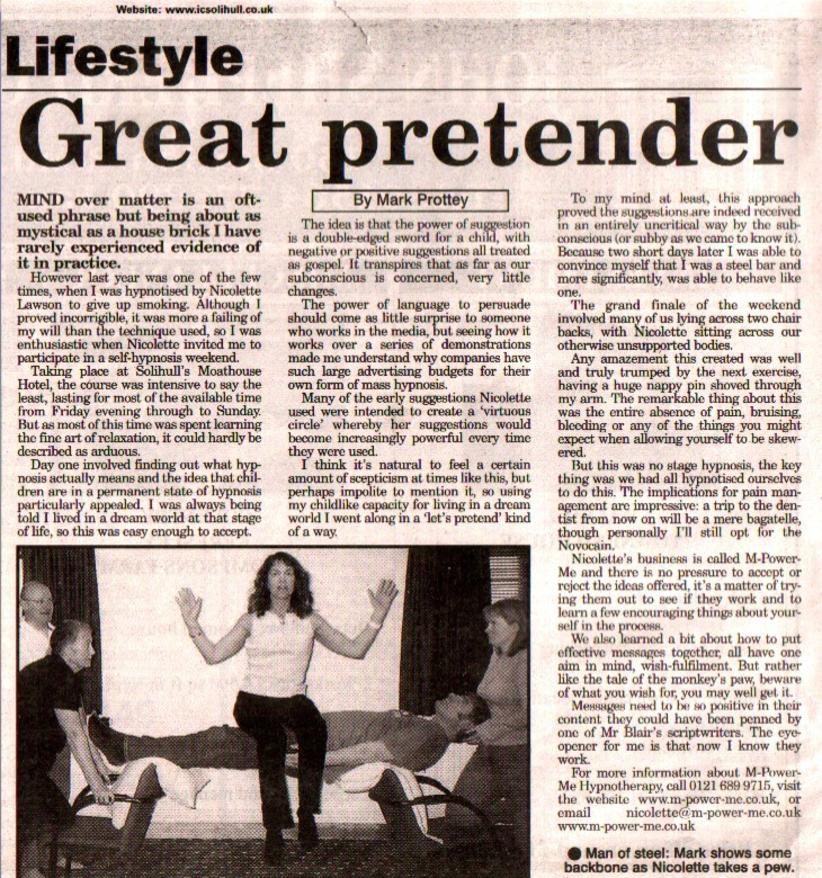